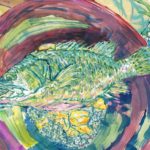 A PDF file of the published article is here: “The Floral Mandarin Fish” in Suzhou Review newspaper, May 14, 2018. 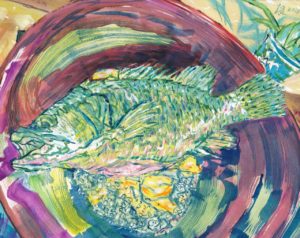 The Chinese perch is known by different names. In the West, it is one of the several fish known imprecisely as the mandarin fish. Its biological taxonomy in Latin is siniperca chuatsi, which translates to Chinese perch (sini-perca.) In Chinese, it is known as gui yu, which translates to “banded fish with a bulge on its back”, or as gui hua yu, “banded flower fish”, I have been told, owing to its beauty.[I] As one of Suzhou’s most popular dishes, it can be found in most fish restaurants in Suzhou as song shu gui yu or “squirrel fish”.

Squirrel fish is the most popular and certainly the most flamboyant method of preparing the fish. A sweet and sour dish, the first thing you’ll notice when the fish is brought to your table at a restaurant, is that it is bright orange. Also, it is served whole, head and all, and presented magnificently, belly-down, head arched upward, open-mouthed. Its body seems exaggerated in size due to its flesh being covered in fry-battered spikes of meat. At the rear, its tail appears to be a broad brightly spotted fan. Taken in as a whole, lying in a pool of sweet and sour sauce, and garnished with pieces of pineapple, the squirrel fish is exciting in its otherworldly appearance and sweet fragrance.

Without doubt, squirrel fish is delicious. But all said, it is an almost over-the-top, even outrageous, way to serve a naturally delicious fish. I say this because frying a fish and covering it in a sweet and sour sauce isn’t exactly the best way to express its natural flavor, and the natural flavor of this white lake perch is exceptionally unique! In my estimation steaming it is the best way to truly bring out the natural flavor of the flesh, skin, and broth. The first time I had mandarin fish steamed was at a Christmas party where I have to admit — with a shame similar to that of forgetting a host’s name at a party — I did not recognize the fish as that same fish who’s company I had enjoyed earlier in the week as squirrel fish. That steamed Christmas fish in the center of the table was uniquely delicious. The fish’s skin had puffed up and with the meat connecting it, became soft, somewhat gelatinous in texture, and was surprisingly fragrant. When people say that they don’t like fish, it’s usually because they find the “fishy” smell to be somewhat off-putting to them. Not so the mandarin fish. When steamed in its own juices, its meat has a surprisingly delicate fragrant flavor. I hadn’t experienced anything like it before.

After discovering the fish’s name — gui yu — I felt like a culinary prince who had found his Cinderella, and I was determined to try my hand at preparing the mandarin fish served, as I had had it at that Christmas party, steamed in its own juices.

You can do this yourself by using either a steamer or a wok if you do the stir-fry steam method. To prepare it in this technique, you’ll need to gut the mandarin fish, and let it sit in a marinade of yellow cooking wine, soy sauce, and salt for a few hours. You’ll also need to cut fresh ginger into small slices. The cooking is easy and quick. First, heat a small amount of oil in the wok, quickly warming the fish on both sides. Then making sure to be careful of the hot oil, pour in the marinade with a little water and cover the wok to allow the fish to steam in this broth. Flip the fish and re-cover the wok, checking both the level of water in the wok and the softness of the meat. When the meat is soft and tender, garnish it with green onions, steaming them for about thirty seconds, and then finally pouring the fish and its broth into a shallow bowl, which you can serve to family and friends at the table.

I’m sure your guests will comment on the unique fragrance of the gui yu, or as it is also known gui hua yu (“banded flower fish”.) Perhaps there is a play on words here, for isn’t another meaning for gui “sweet smelling flower”?[ii] Maybe the mandarin fish isn’t called “flower fish” due to its elegant good looks alone, but also due to the unique floral fragrance of its meat.

[ii] 厥 gui = band, which is the right side of the character 鳜, gui yu or “banded fish”. 桂 gui = sweet smelling flower. 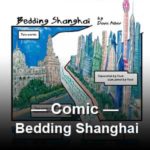 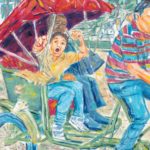