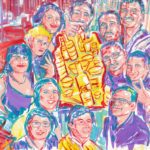 A PDF file of the published article is here: “Getting Social at Suzhou’s Night Market” in Suzhou Review newspaper, May 28, 2018.

“Getting Social at Suzhou’s Night Market” 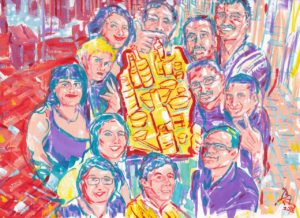 Too often our lives can be compartmentalized by the social roles of work, school, home, or contracted into a hunched-over typing into so-called “social media”. By contrast, night markets offer a great opportunity to bring people together in the real “off-line” world. Bringing different social groups together allows for people from different institutions and even different countries to get together and share experiences. Doing so, we become human beings interacting again, as opposed to “work robots” or texting appendages to cellphone masters.

The night market in Suzhou that our group chose was the Dachengfang Guanqian Night Market. It is one block west of the Temple of Mystery (Xuanmiao Temple) in Lequiao. I recommended the place because I had been there one year ago when it was much livelier; a second row of shops had been set up in the center of the road which was filled with tables and chairs, as cars were kept clear of this social space. However, now as the vendors told us, the police had told them to clear the street of tables, chairs, and vendor’s stalls. Replacing them, there were now a few cars parked empty and useless in the street. These derelict cars littering the street like discarded cigarette butts, were bleak symbols of an affluent disregard for the communal space of others. It made me sad to see that human beings had lost this social space. The abandoned cars had won.

However, as we found a restaurant that was willing to set up tables and chairs outside as in this night market’s heyday, our group was happy, eating street food together and enjoying hot plates of crawfish, grilled oysters, steamed clams, and barbequed meat all served with bottles of cold beer. Our group was a mixed bunch; there were people teaching at three different educational institutions, people from five nations, collectively speaking almost twenty languages. Interestingly, three of the five people from Spain were world famous graffiti artists from Madrid who were here with the curator of the local gallery, Suzhou 56 Cultural and Creative Park where this graffiti army was exhibiting their graffiti event called “Freedom World” and hosting an art party on Saturday, May 26th.

I asked those in this creative and linguistically diverse group, “Who inspires you?” for I believe that one of the best things we can talk about in life is our collective and individual inspiration, wonder, and joy. I started by giving an example, telling people that the illustrator Dave McKean seems to be able to do almost anything. His graphic novel Cages is, in my estimation, the best piece of comic art ever created. A jazz pianist at our table who plays regularly in Shanghai shared that Bill Evans inspires him. Evans was known for revolutionizing the harmonic language in jazz piano. One of the graffiti artists shared, “All of those people whose lives are a lesson for the rest of us. All of them. There are far too many people to name, whosoever they may be.”

Indeed, and its an honor to be among those whom are “too many to name” sharing good food, conversation, and inspiration. Because in our city life, where our external environment is often too crowded with cars and our internal world is drawn increasingly into the tunnel-vision of a cell phone’s demands, its nice to escape back into human spaces like night markets where crawfish, steamed clams, roasted oysters, and barbequed lamb become all the social media we need. 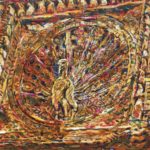 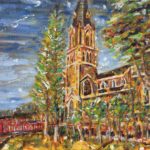