Article: “The Story of the Nian” Open Magazine 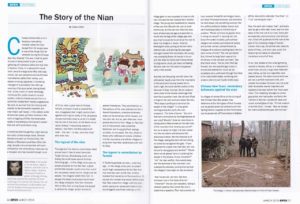 In the photograph, friends pose behind a chalk talisman drawn in front of a Chinese home in rural Henan, China near the city of Jiaozuo. The family of the home drew the talisman in front of their house to protect it from the Nian, a creature from Chinese mythology. According to Chinese myth, legend, folk custom, the Nian stalks about hoping to eat people during the change of the year.

The Story of the Nian

Chinese folklore tells us of a ferocious man-eating monster called the nian; escape from its hungry jaws is one of the things that we celebrate during the Chinese New Year Festival. This year, I had the good fortune of being invited to join a small gathering of marketers before the New Year in Suzhou, China. In a restaurant’s small room, around a large table filled with tasty dishes, bijo was passed around as Chinese businessmen patted their bellies, and started smoking cigarettes. A marketing manager of a successful new start up, wearing a thick gray jacket, having heard that I wrote a book on world mythology, mentioned the mythic beast to me and scoffed, while his friends around him in a semicircle nodded their heads in agreement. We were all warmed from the bracing cold outside by the somewhat imperfect and intermittent wall heater, in this coldest winter of some ten years, yet there hovered in the room a lingering chill like the inextricable reality of something unnerving and unseen that one can’t quite shake away.

I mentioned that though they might dismiss the reality of this strange beast, Chinese literature as early as the late Zhou, The Classic of Mountains and Seas (Shan Hai Jing), records many encounters with such unexpected and extraordinary creatures. As a foreigner who has traveled through much of China, read a great deal of Chinese folklore, and seen rituals to ward off the nian, I suggested that I might caution them against scorning the reality of this ubiquitous menace that lives close by us all; it’s breath, like the chill in the room, on the backs of our necks. Indeed, I have strong reason to believe, I told them, that this creature of myth — the nian — is real… and very much alive even now.

The legend of the nian 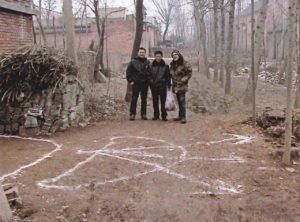 The legend of the nian is a horror story retold around hearth fires of small towns like Tongli, Nanxun, Zhouzhuang, Luzhi, and Xitang, the small towns around Suzhou. Once long ago… in this village, every year as people prepared for the New Year, a great and terrible monster would come from out of the mountains, break into the village and eat people. The villagers called it the nian. To escape the beast most people would leave the village during the New Year. However, little by little, from among those that stayed to defend the village, people learned to protect themselves. They paid attention to the behavior of the nian and learned that it feared firecrackers, protective talismans drawn at the entrances of the houses, and the color red. And so, year after year, more people returned to their village on New Year and lit firecrackers, drew protective talismans, and hung good luck sayings, chunlian, on red paper. The nian, afraid of these artful defenses of culture, withdrew into the mountains and left the villagers to enjoy their New Year celebrations with their families.

The legend is embellished by Taoists

In Taoist households we hear… once long ago… in this village, every year, as people would begin preparations for the New Year, they were set upon by the nian, a fierce monster that roared out of the mountains. To escape the monster they would, before every New Year, leave their village. Until one year, as the young man whose job it was to help any stragglers was finally walking out the village gate he was surprised to meet an old man who said he had traveled from another village. The young man hastened the traveler to flee over the hills with the rest of small community, but the old man lifted the tired hand of obstinate old age and said that he would rest his legs at the village gate and see what he could do to convince the nian to leave the villagers in peace. Violently shaking his head, pulling at the old man’s tattered robe, and darting his eyes again and again toward the mountains, the young man eventually threw his hands in the air and fled after his family and friends whose tiny figures he could just make out trailing like ants over the hills which now glowed eerily in the sunset. Scarcely had the young man left when the old traveler heard a roar from the mountains to the south and coming toward him in dusk’s light, he could see the outline of this devourer of lives, the nian. As the creature came close to the traveler whom age had bent like a question mark, the old man lifted a finger in the cold wind and asked the nian, “What does it profit you to terrorize the people of this village?” In a low growl slinking across the earth, the nian answered, “The fame of terror.” “But isn’t that fame diminished by the helplessness of your prey? Wouldn’t there be more fame in eating poison-filled snakes on the dark side of the mountain from whence you came?” And so to prove his might, the nian roared into the mountains and devoured the poisonous snakes, then he returned to of the village, seeing the bent old man sitting on a tree stump against the gate. “I have digested the snakes that men fear; am I not famed for being great and terrible?” “Would there not be greater fame in subduing the beasts in the shadow of your mountain?” “Ha!” the nian scoffed, then roared away into the darkness of the mountain, and subdued the animals, taming them so that the villagers’ lives might be less burdened. “See me as I am, old man. See how immense I am in this fame of terror.” “Immense?” the old man repeated, raising a crooked eyebrow that turned the nian’s boast into a question. Then that crooked old man revealed himself to be Hongjun Laozu, the Great Primordial Ancestor, and stretched his bent shape into something curiously like the unified perfection before heaven and earth had separated on the first day of creation. “Would not there be greater fame in being my mount? In carrying me, the Great Primordial Ancestor, just as those villagers themselves and indeed all people are carried, carried, carried forward by lineages of ancestors reaching back into the dark tunnel of time?” The nian pondered this, blinked its large black eyes at the immensity of the concept, and said, “Aye, that there would.” And so, from that day forward, the nian was Hongjun Laozu’s mount and carried him, much as our ancestors carry us forward through the mists of an inextricable reality, unnerving and unseen, that one can’t quite shake away.

In villages all across China at the turning of the Chinese New Year people draw talismans at the front gates of their houses; just as people place red talismans with the Spring Festival couplets on their front doors; just as people set off firecrackers to frighten off the nian and to celebrate “Guo Nian” (过年) or “surviving the nian.”

Or so I had related at that small gathering recently in Suzhou, China, in a restaurant’s small room, around a large table filled with tasty dishes, as bijo and cigarettes were passed around. The table around which we sat was a perfect rosewoodcircle, and outside the window the moon was not quite dark; its shadowleaned imperfect and lopsided a few days before New Year’s darkmoon. The marketing manager in a thick gray jacket who had earlier scoffed at the mention of the nian nodded his head and raised a small glass of bijo. “To that creature of terrible fame,” he said. “May we escape the nian’s clutches this year and the next.” 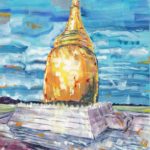 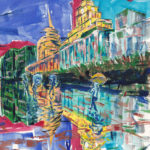 Bund in Shanghai, China, in Front of the Custom House (Clock Tower)
Scroll to top